For as long as I’ve lived, and long before that, Norway has taken pride in being one of the few nations in the world where police do not carry weapons, specifically firearms. Now, about two weeks ago there was a terrorist scare; no actual attack ever took place, but according to the Norwegian Police Security Service (PST) there had been signs that Someone™ was planning to do Something™ in an undisclosed location at an undisclosed time. As a result, there were heightened security measures in all locations that were considered possible terrorist targets and border crossings, which included an increase in visible police among the general public, and contrary to habit they were carrying guns.

The linked articles are in Norwegian, and for the amount of work involved in doing so I have not provided a translation. Sorry. 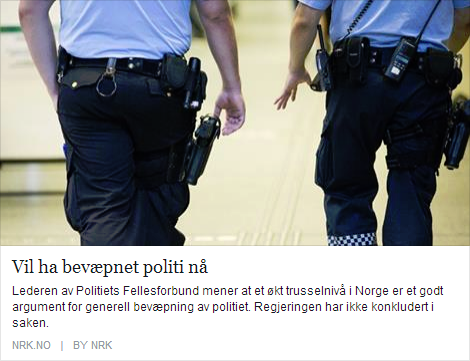 Whoever the suspected terrorists were, and whatever they had intended to do, at least thus far never surfaced and never happened. Whether this is due to the unexpected presence of an armed police force, or the fact that they had lost the element of surprise, or any other of a multitude of possible reasons, I do not know. I was happy to see that the arising situation was responded to and measures were taken, and though I cannot be sure because I don’t have the insight, I’m under the impression that it was dealt with better than the 2011 bombing in Oslo and massacre at Utøya (executed by a certain despicable native Norwegian individual, who has later received way too much attention to pamper his inflated and misguided ego, and not an Islamic extremist as many first suspected at the time). 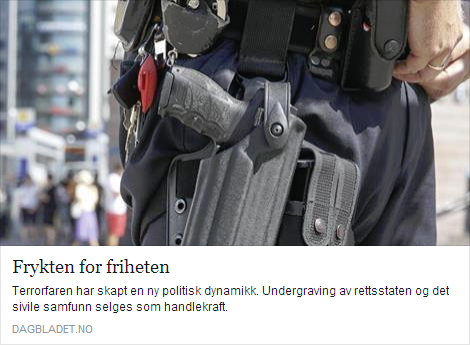 After this interval of heightened security, with the presence of armed police among the public, some people, both among the police, politicians and people in general, have expressed a wish to have our police carrying firearms at all times, as part of their everyday appearance and duties.

My immediate response to this is “No!”. And after a great deal of thinking, it’s still “No!”. 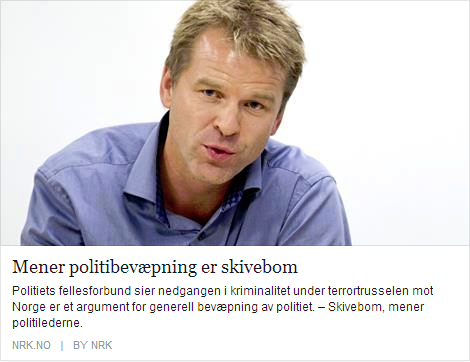 It’s my view that to have the [Norwegian] police begin to carry firearms on a daily basis would be to cross a considerable and important barrier — one which has already been crossed in, say, the United States — in the sense that once available, the threshold towards using them will be severely lowered: first as a deterrent with a drawn gun, then with warning shots, moving on to actually firing at the suspect; non-fatal at first to immobilize, and finally with the intent to kill. Even if this escalation doesn’t take place immediately, a general arming of the police still has the potential to drive developments in that precise direction. The response to the police arming up will be an increase in weapon use among criminals, also among those who today do not normally carry guns.

Not to mention that the presence of loaded firearms in public grossly increases the risk of gunshot accidents even long before their active use has reached deadly proportions.

If we decide to arm our police due to fear of religious and ideological extremists existing in the world, then those religious and ideological extremists will have won. They will have scared us into giving up the benefits of our way of life and our freedom, precisely the things that they despise us the most for. Yes, I’m aware that I sound like an American patriot saying that, but I believe it is true. 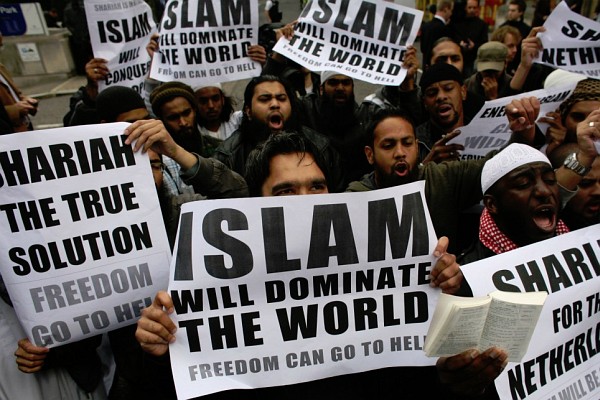 This last one is just an example illustration. For the record: I do not think that these individuals speak for the majority of their religion or ethnicity, any more than I think that Norwegian nationalist extremists such as neo-nazis (I won’t even grant them a capital letter) or Anders Behring Breivik speak for me or Norwegians in general. We all have our share of loud, annoying and dangerous nitwits among us.

One thought on “A Call to Arms: Hello, This is Fear Speaking”