When I arrived at work today, having just parked in the basement garage and was headed for the entrance, I got intercepted and verbally assaulted by … a sparrow!

I have no idea what he wanted, as my Sparrowish is worse than rusty, but for an entertaining couple of minutes the little feathered fellow was giving me a rather substantial piece of his mind, and refused to let me near the door. Whenever I moved, he moved. If I side-stepped, he side-stepped with me. When I turned, he fluttered swiftly sideways and blocked my path again. It was an interesting, if puzzling, little dance of dare and danger. I got the distinct impression that he was saying something like, “Wanna piece of me? Huh? Do ya? Do ya?”

I would have provided pictures and video of the confrontation if I hadn’t at this point discovered that I’d left my iPhone in the car. When I returned moments later, after retrieval of said misplaced Apple-gadget, my adversary had directed his attention elsewhere and was busy delivering a stern and lengthy reprimand at a couple of air conditioners nearby, though whatever beef he had with them was lost on me, and I was running late for work. I’ll have to see if li’l McFeathers is still there to verbally abuse me again when I get off work at ten tonight. 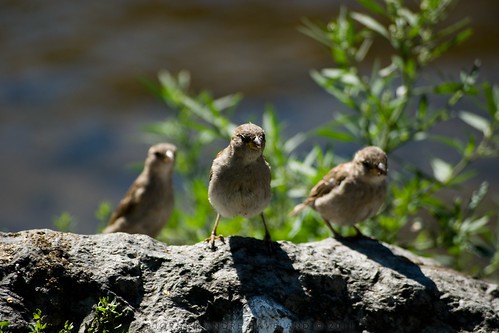 The sparrows in this image are not related to this particular incident, but the stance and attitude of the middle one looks rather like the one I encountered today.