I’ve no idea where this apple comes from. It could be locally grown here in Norway, but then again it might as easily have been picked in an orchard in Spain or Argentina, or anywhere else for all I know, and transported halfway across the world to end up in my hand.

(I’m making a point of not checking the other apples in the bowl for telltale stickers. I prefer, for the moment, the sense of mystery.) 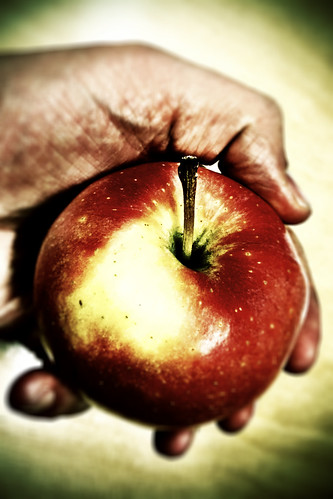 This apple may well have grown on a tree in a country that I’ve never been to, in a town that I’ve never heard of. The nutrients within it came from the soil upon which that apple tree stood, soil which in turn had been fed with compost from plants and animals that, in their turn, had fed and grown on the same land. It was hydrated by local rains and groundwater. I’m about to eat a portion of a completely different part of the world, and by doing so I become a little more that part of the world myself. With every apple or grape, and every other item that I eat and drink, which come from elsewhere in the world, my earthly being is the sum of an international conglomerate of bits and pieces of other countries and cultures.

It makes me wonder if other people think the same before they take the first bite of an apple.