Skip to content
My dear wife and daughters got me something absolutely wonderful for Christmas: a beginners’ astronomical telescope! Alas, since then, the weather has gone out of its way to keep the night sky veiled and thoroughly hidden around these parts. Only last Sunday did I catch a momentary break in the cover, and an opportunity to check if my some-assembly-required-fu was as stellar as I’d hoped.

Some wobbliness still remained, possibly due to the fact that this was a non-IKEA product with no Allen wrench in sight for miles, thus forcing me to use such unfamiliar tools as — *gasp* — a screwdriver (neither vodka nor a single orange included). Plus I’ve never actually operated a proper telescope before, and much of the initial navigation of the heavens was by trial and trial and trial and utter trial and error. Stars are painfully difficult to track by hand, at least with inexperienced hands and unfamiliar controls, so both Sirius and Betelgeuse ended up far more successful in their game of hide than I was at my game of seek. I suspect my finder may be severely misaligned and the target of future calibration. 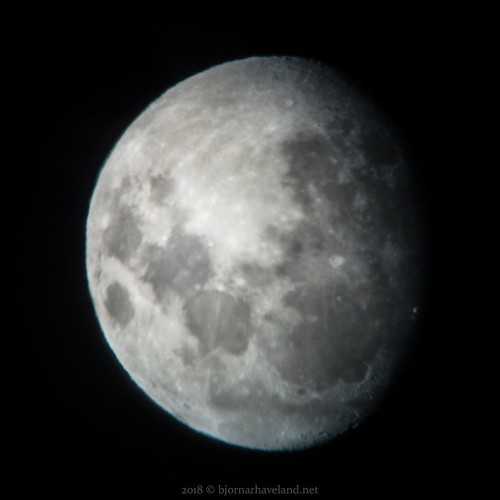 Enter trusty old Moon, whose location in the sky is hard to miss unless you try very, very hard indeed, meaning even I ought to be able to do it blindfolded (for the record, I tried without the blindfold, which may have helped). Let me tell you, the apparatus works! We spent a chilly fifteen minutes or so in –7°C, gazing at craters, ridges and plains all over the lunar surface, as well as the zig-zagging of shadows along the terminator. The moon is a big place when it’s up close! Just before I decided to let temperature dictate the duration of this adventure, I fired off a couple of shots with my iPhone into the viewfinder, and here is the result … though I ought to add that the image we saw with our eyes was far better than what the iPhone in my by then freezing hands could capture 🙂