With head heavy, eyelids heavier, hand tightly gripping the handle of a pint mug of tea, by now half empty and barely warmer than its surroundings, I sit quietly in a daze, resisting with all my strength the urge to doze off, listening intently to the silence of the room around me, and the whispers in my mind. 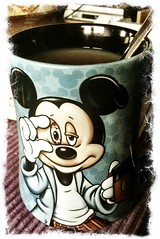 “If off to sleep you go,” say the hissing voices in the deep of the darkness, “then Day ends. And then YOU,” they add with creepy emphasis, and the implied wagging of a multitude of invisible but menacing, clawed and scaly index fingers, “and then YOU will have KILLED it!”

And that thought, that awful, nagging thought that I might thus become The Murderer of Day keeps me awake at night, if only just, until Morning comes sneaking up on me to ensure with brutal certainty that there is no way back, and that Day must finally give up what’s left of its spark and die. But then at least I know that it is not I but instead Tomorrow that killed Day, and I am left to grieve in my innocence the tortured hours of sleep that never were, the collateral victims of The Battle of Night. Now, at last, I can close my eyes against the emerging light, to catch a few, hasty moments of rest before the cycle starts again.

And this is why I drink as much tea as I do (you might prefer coffee), to stay awake for as long as I can, drifting into more or less meaningless mental meanderings and philosophical hiccups, and occasionally end up writing silly nonsense like this.

From the drawer dungeon of notes that never made it to become more than just that, a bunch of notes in a drawer dungeon, but hey, they’re still © me.

2 thoughts on “The Murder of Day”