So last night while out driving I saw one of the prettiest sights I’ve seen in the sky: the half moon shining pale and yellow through a thin and wavy veil of clouds, illuminating them like a frosted glass landscape from within, and flanked on its left side, barely a fist’s width distant, by the steady, almost ruby red point light of Mars, peeking through an opening in those same clouds. 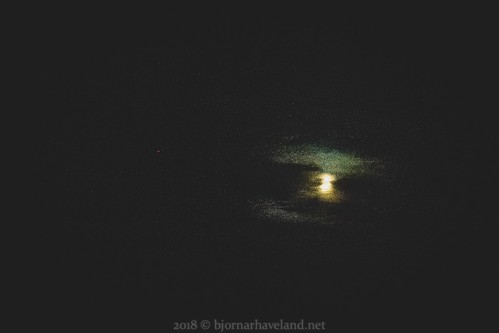 It was so striking, I had to pull over and stop to have a long, good look. Yet however much I try, I don’t think I can properly describe it to you. It was like watching magic of a fairy tale unfold before my eyes, as if Gandalf himself had blown pipe smoke into the sky, and the elves had set light to it.

If I’d brought the Nikon, and a long lens and a tripod, I might’ve been able to capture a glimpse of the scene. But I hadn’t brought the Nikon, or the long lens, or the tripod. All I had was my phone, and all I could do was try. And it was well that I did, because moments later the clouds had moved on to cover everything, and neither moon nor Mars could be seen anymore.

But the phone camera can only do so much, and it wasn’t enough. Even though I captured the pictures in RAW, it took me a good hour to get this much out of the best of them, and I had to cheat so much to get there. This photo, which you see above, falls endlessly short of what my eyes could see, but for now it will have to do.

I’ll just ask you to look up, look around you, look with open eyes, and notice and enjoy what you see. However boring everyday life may seem, there’s a world and a universe of amazing and beautiful things out there!