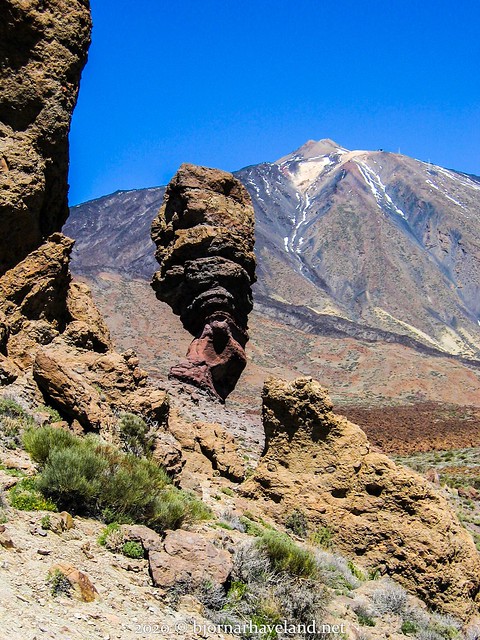 El Teide, Tenerife, 2004. As far as I can recall, this is the highest I’ve ever been without the aid of an actual airplane, and definitely the first and so far only time I’ve ever been in or on a volcano. The peak, which towers impressively in the background, is a good 3,718 metres (12,198 feet) up in the air, but being a modest sort I settled for the tourist platform at just 3,555 ( 11,663 feet) — where the air was already thin enough (about two thirds of that at sea level) that I felt slightly but comfortably intoxicated, which is the closest comparison I can think of in the face of a mild reduction in breathing material. Many visitors had to stop and take extra breaths from time to time, but most kids, including our own two, went totally bananas with running and shouting.

The view, to say the least, was absolutely amazing! I would say breathtaking, but that detail has already been covered.

Speaking of bananas, it was repeatedly pointed out that Tenerife had the best bananas in the world, in that although they were smaller, they packed far more flavour and nutrition. Having sampled a few, I can certainly attest to the taste part.

They also told us that the very same bananas were illegal to import to the EU, because they were too short to comply with EU vegetables and fruits rules and regulations, thus depriving the poor suffering souls trapped in the restrictive market of mainland Europe (and the British isles) of a good, proper, fulfilling banana experience. This whole thing about illegal import was, it turned out, a load of hogwash concocted for the benefit of tourists, but it did admittedly make for an interesting and engaging narrative to complete — or at least fill inn the content gaps of — our guided tour.

The bottom of the large crater was littered with crazy shapes like this one (see attached illustration), and gave an eerie feeling of being stranded on Tatooine, with Jabba’s palace just around the next corner. Indeed, our guides were thrilled to inform us that both Star Wars and Planet of the Apes had been filmed there — another fact which later turned out to be not even remotely true, but certainly amusingly interesting at the time of lying, and a selling point which the local tourist industry was eagerly milking for every penny’s worth. There was also an X-Wing fighter, but more about that some other time.

In order to come to a full circle in the pursuit of truth I might add that the 3,718 metres quoted at the top, has later been revised to read 3,715 metres, which might indicate that a) measurements have become slightly more accurate in the intervening years, b) the whole volcano has sunk or shrunk ever so slightly, c) that the metres used to measure the thing have become slightly bigger, but whichever is true, the net result is that I was three metres closer to the top than I thought I was, which on a personal level I feel is at least slightly interesting.