Random sighting of two ancient communication enclosures in Manchester, England, shortly prior to the Great Continental Exodus of the early Third Millennium, CE. 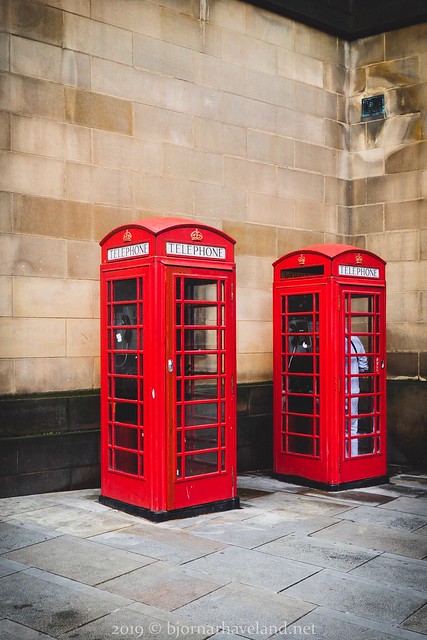 The apparent likeness to similarly sized and shaped portable enclosures for personal relief is purely superficial, as indicated by the presence of transparent sections in one and the absence of such in the other, and confusion of the two is generally frowned upon. As the old saying went, “to phone in a crap booth is one thing*, but to crap in a phone booth is quite another.”

(* indeed, during the end of the Second Millennium and the beginning of the Third, this was considered commonplace, almost ritualistic. However, with later incarnations of portable, personal communications technology, which relied heavily on visual interaction, this practice eventually drifted out of fashion.)

To add to the confusion, for reasons unknown, the individual occupying the rightmost booth utterly neglected to exit wearing a red and blue spandex suit and cape after hanging up. Surely this must be due to a malfunction, or a rounding error.